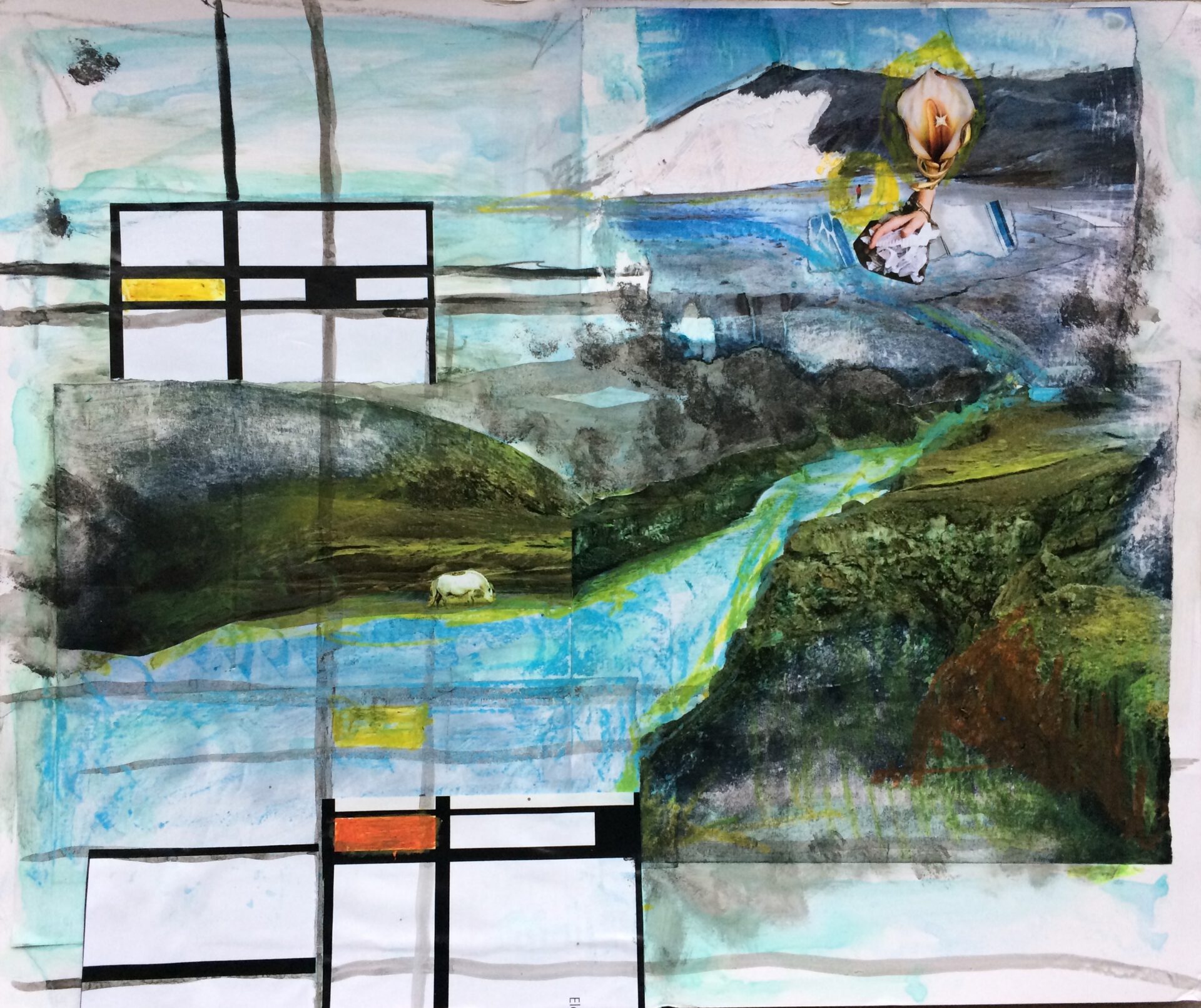 “EVERY ACT OF CREATION IS FIRST AN ACT OF DESTRUCTION” (Picasso)

Allowing the polarity of DECONSRUCTION & RECONSTRUCTION or DESTROY & CREATE to inspire the creative process, letting newness and inspiration arise.

A deeply, heart-opening session. I had my first tears of inspiration, just reading through the  briefing! A perfect and relevant theme for me to work with, as I strive to re-create myself. What do I keep, what do I let go of?

I was enthusiastic, eager, ready to go, to explore my soul through art making, curious and excited to see what would happen… perhaps a little over enthusiastic, as I misread the first part of the briefing, I created the first collage on a cardboard vs. 60gsm A3 piece of paper. It was to be my gift for the lesson. After having had a little panic, and not knowing what paper I was to create the first collage on, I decided to opt for a cardboard. My next challenge was having to let go of attachment to this first collage. I found myself becoming attached to the feeling, which was arising during the creative process, a melancholy, a sense of being caged, in contrast to the wild, open free landscape I had created in the first collage. The polarity of caged vs. free.

The next step in the process, was to cut the collage into equal strips, 3 cm wide. The fact that I was being asked to cut the strips equally, gave me a sense of safety. I felt safe in the knowledge that I could stick the collage back together again at any time. It was with a sense of curiosity that I started cutting, excited to see what would emerge in the next step… little did I know. Reading only one-step at a time, meant I had no idea I was going to create a new collage with these strips of cardboard. That was to be my next challenge and my gift.

I forged ahead, at first, I wove them together like a basket, to give the strips stability, that way I could stick them down more easily. But that felt too tight. So, I broke it up again. Threw them down, like Mikado sticks. Then I created a fan, like a Papyrus fan… What was I going to do with these long strips of rigid card? Eventually, I decided to weave just a couple together, but not too tightly, so that there was space, and they were not completely straight. Then I tore some strips up. Cut others into thinner strips. It had very much a 3-dimensional, sculptural quality to it. Did I want to keep that? Partly, but no, I didn´t want to create a sculpture, not yet. I softened the edges and hard lines by applying a green ink wash in the background. Applied some gold leaf… and then there was the Arum Lily, which had miraculously survived being cut into strips. I only placed it, at the very last moment. As my mentor later suggested to me, perhaps it was necessary for me to lay the foundation, prepare the field first, before laying down or planting the (my) flower. The Lily in the center, in the foreground, as opposed to being in a faraway land in the first collage.

“In my collage rigidity and freedom dance together, they hold one another and create a dynamic space, open and energetic.”

The gift which emerged is the polarity of RIGIDITY vs FREEDOM. What does this mean to me? Is there a judgement in rigidity? Yes. A strongly negative judgement – reminds me of my inner critic. My mentor gently reminded me, that even in nature there is rigidity, it creates a rhythm, brings definition, like the seasons, Spring always follows Winter.

In my second collage rigidity and freedom dance together vs. Being separate as in the first collage. In the new art piece, they hold one another and create a dynamic space, open and energetic. I titled the art piece FREEDOM.

Did you enjoy reading my blog, do you have comments or feedback?
I would love to hear from you, please send me an email. Contact